10 years into the Rotary-USAID water and sanitation partnership, here’s what worked, what didn’t — and why

An old piece of railroad track is laid across a pit toilet. The walls are crumbling. The stench is overwhelming. It’s the only toilet for a school in rural Ghana, and most children refuse to use it. They do their business outside instead — or quit school altogether.

This is an all-too-common experience: Half of Ghana’s population lives in rural areas, and only 10 percent of those people have access to basic sanitation. Two-thirds can obtain safe drinking water — after a 30-minute round trip.

Since 2009, Rotary has been working to fix those deficiencies through a partnership with the U.S. Agency for International Development (USAID). The partnership combines the business skills and local community leadership of Rotarian volunteers with the technical expertise of USAID. Rotary is contributing $9 million to the $18 million partnership; outside of eradicating polio, it is Rotary’s largest partnership effort. “We wondered how these two organizations could come together and exploit the synergy between them,” says Rotarian Ron Denham, a member of the Rotary-USAID steering committee.

Ghana was one of three pilot countries when the program kicked off. Projects were implemented in two phases: Phase 1 concluded in 2013, and Phase 2 will end in 2020. “As a result of this partnership, we’ve been able to reach out to some very deprived communities,” says Emmanuel Odotei, WASH management specialist for USAID/Ghana. “If USAID had tried to do this alone, or if Rotary had done it alone, we would never have achieved as much as we have today.”

Throughout, the focus of the program has been on accomplishing three goals: improving sanitation and hygiene in schools and health facilities; increasing community access to safe drinking water; and advocating for ample government financing of WASH — that is, water, sanitation, and hygiene.

“We wondered how these two organizations could come together and exploit the synergy between them.”

The installations and the number of people who benefited from the program were significant. But that’s only part of the story. The partnership also trained school health educators and community-based hygiene promoters to lead behavioral change campaigns that would deter open defecation (see page 38). It helped establish local committees to manage the water and sanitation systems after Rotary and USAID departed. And it empowered community leaders by showing them how to go to their district assemblies and demand that funds be allocated — and used — for water and sanitation services. “Rotarians are very well-connected,” says Alberto Wilde, the director in Ghana for Global Communities, a development agency contracted by USAID to implement the program in Ghana. “It’s easier for us to make changes in policy if we have the right people who can open doors with decision-makers.”

The scale of the program demanded the close involvement of more than 100 Rotarians. Roughly 30 of Ghana’s 50 Rotary clubs participated, and each of those clubs assigned members to remain engaged throughout its involvement. Each club supervises the implementation of multiple projects, some of which might be a six-hour drive away along dirt roads that are impassable in the rainy season. “Rotarians are making big sacrifices for the projects,” says Ako Odotei, a member of the Rotary Club of Tema and the Phase 2 chair of the host committee of local Rotarians directing the partnership alongside USAID. “These projects are their babies.”

Last summer, representatives of the partnership toured some of the communities where it had implemented projects. As is the case globally in the water and sanitation sector, some of the projects were successful and some were failures. Most were somewhere in between. Some of the lessons learned are described on the following pages — lessons that can help ensure success in future programs.

How Rotary and USAID work together

Community-led total sanitation (CLTS): A behavior change approach to lead communities to want to use toilets; the goal is for a community to be certified “open defecation free.”

Global Communities: A nonprofit devoted to sustainable change that USAID contracted to perform its work in Ghana.

Microflush toilet: A toilet that uses the previous user’s hand-washing water to flush away waste.

Peri-urban: In Africa, a community adjacent to a city or urban area.

Pit latrine: A hole in the ground covered by a slab or seat for the user, with a structure built around it for privacy. Ventilated improved pit latrines add a vertical vent pipe with a fly-screen at the top, which reduces odor and insects.

Encouraging a change in habits

An estimated 1 in 5 Ghanaians defecates outside rather than into a toilet; the resulting contamination of water, soil, and food is a major cause of diarrhea, one of the leading killers of children under five worldwide. Among the nation’s poorest, the figures are even more staggering: 53 percent of families in the lowest economic quintile practice open defecation.

Ghana has made great strides in providing clean water, reaching an estimated 80 percent of the population. But only 18 percent have access to a latrine or toilet for their household’s personal use. Why has improving sanitation proved so difficult?

Several factors are at play, says Emmanuel Odotei, WASH management specialist for USAID/Ghana. Migration from rural areas to urban centers has surged, and sanitation improvements haven’t kept pace. And for new housing to be approved, it must have a latrine, but monitoring has been lax and that requirement is not always fulfilled, Odotei says. Meanwhile, in rural areas, most improvements implemented in the past addressed clean water but overlooked sanitation.

The situation has a cultural component as well, Odotei explains. Traditionally, multiple families live in one compound and share a latrine. But maintenance of shared latrines is often poor, and therefore these facilities are classified as “limited service” under development guidelines.

The Rotary-USAID partnership seeks to address this issue by building latrines and changing behavior using a method called community-led total sanitation. Facilitators help community members see for themselves the consequences of open defecation, triggering a collective sense of disgust and embarrassment once they realize that they are consuming one another’s feces through things like utensils washed in contaminated water and flies on food. “When people get triggered, they come out willingly to construct their own latrines,” Odotei says. “We support them with a market-based approach. Then you can get to the point where a whole community is declared ‘open defecation free.’”

About 740 communities in Ghana are open defecation free, “with many more in the pipeline,” Odotei says. “Our collaboration with Rotary is a contributing factor.”

The importance of a program manager

One takeaway from the Rotary-USAID work in Ghana was the importance of hiring a dedicated program manager to coordinate the work of the partners — a lesson that could transfer to other large-scale Rotary programs. Rotarians are sometimes reluctant to hire a professional because they want all funding to go toward their projects and their beneficiaries, says Ron Denham, a member of the Rotary Club of Toronto-Eglinton, Ontario, who was involved in the creation of the Rotary-USAID partnership. But a project could be more effective if there’s a professional dedicated to managing it. “Throughout the world, Rotarians are all volunteers,” Denham says. “Every now and then, volunteers or committees find themselves managing a project they don’t have the capacity to handle.”

For the Ghana partnership, Rotarians hired Theophilus Mensah, a civil engineer who had worked for the Community Water and Sanitation Agency, a branch of the Ghanaian government. To aid in coordination between Rotary and USAID, Mensah works out of the office of Global Communities, which helps implement USAID projects. He coordinates and organizes site visits by Rotarians, prepares financial reports, works with community partners, and monitors projects in the field. The linchpin of the program, he ensured the cohesion and integration of assets and efforts at every stage.

Mensah found that WhatsApp groups were a useful way to keep the many participating Rotarians across Ghana updated and motivated. “Because of WhatsApp, people were able to share their challenges with the rest of the group,” he says. “It was fun: People gave encouragement and said this was part of being a Rotarian.”

A tool to predict sustainability

Globally, 30 to 40 percent of hand pumps in developing countries are nonfunctional. That’s the baseline. How could Rotary, partnering with one of the world’s largest aid organizations, do better? That’s one thing Rotary and USAID set out to learn during their decade-old partnership. The partnership developed the WASH Sustainability Index Tool, which can be used to assess the likely sustainability of WASH interventions using a range of indicators. These factors are grouped in five categories:

In 2012, the partnership applied the Sustainability Index Tool to Phase 1 projects and used the results to predict threats to their sustainability.

In 2019, with the tool in hand, the partnership revisited some of those early projects to assess their functionality and any impediments to sustainability.

• This story originally appeared in the December 2019 issue of The Rotarian magazine. 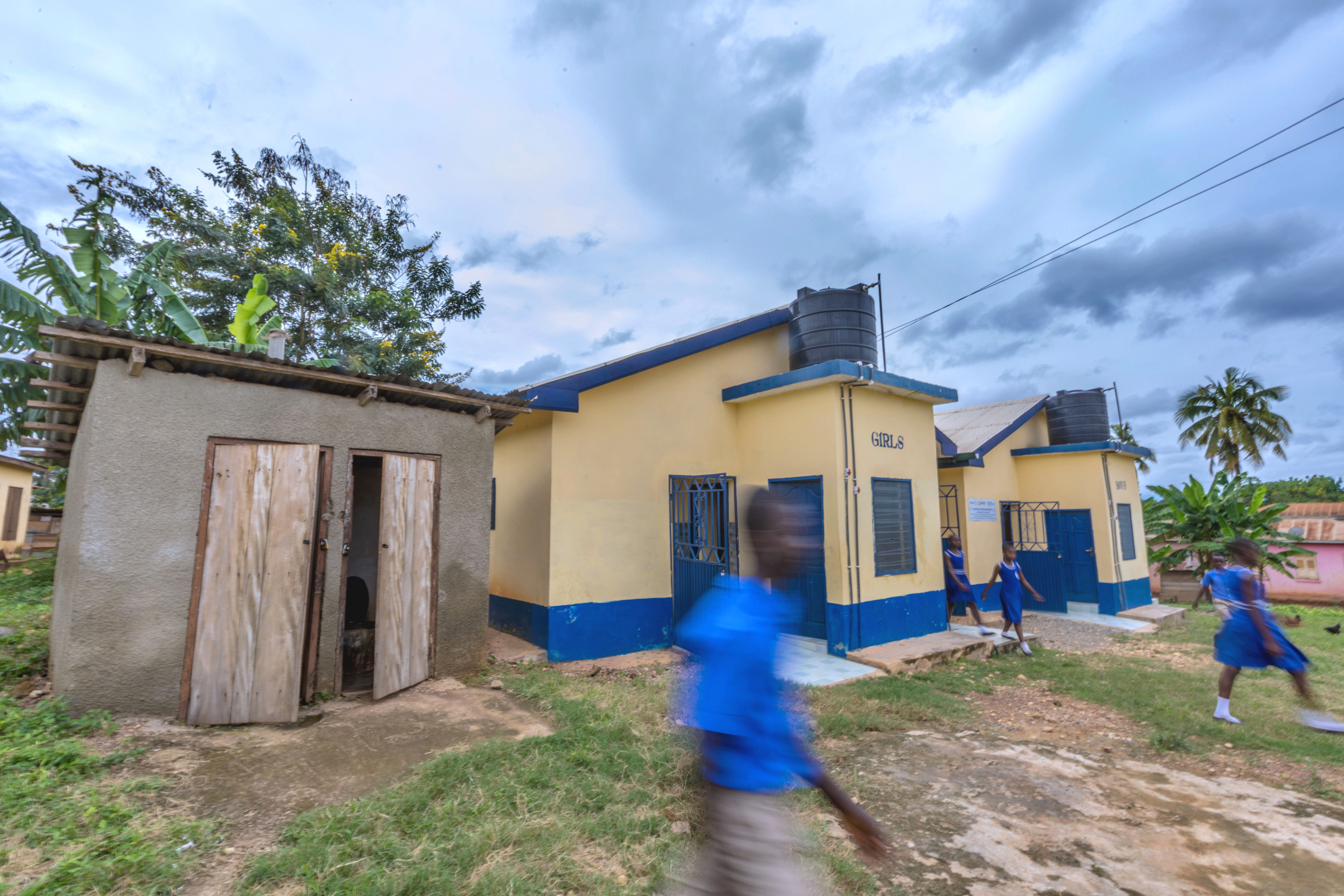