By Ryan Hyland and Teresa Schmedding

Bill Gates, speaking on 12 June at the Rotary International Convention, highlighted the extraordinary progress that’s been made toward a polio-free world, along with challenges ahead.

Speaking at the Georgia World Congress Center in Atlanta, Georgia, USA, Gates reminded the audience of more than 22,000 attendees, who were given LED bracelets to wear, that the effort must continue and be strengthened before polio cases can be reduced to zero.

Calling the Global Polio Eradication Initiative (GPEI) the “single most ambitious public health effort the world has ever undertaken,” Gates, co-chair of the Bill & Melinda Gates Foundation, reviewed the historic milestones of the fight.

At each achievement, including regions of the world being declared polio-free, sections of the arena were lit up by the LED bracelets, making the attendees a part of the presentation.

Gates thanked Rotary for being the catalyst and visionary partner for ending the paralyzing disease worldwide. “Rotary laid the foundation with its unwavering sense of purpose and its belief that anything is possible if you put your mind and body to it,” he said.

Since the GPEI effort began, polio cases have dropped a staggering 99.9 percent, from nearly 350,000 cases a year to only five cases reported this year, a record low. The virus has been eliminated in all but three countries: Afghanistan, Nigeria, and Pakistan.

Gates noted that more than 16 million people who would otherwise have been paralyzed by polio are walking today. “The scale of this effort is phenomenal,” he added.

"Polio is the thing I spend the most time on. Every day I look at my email to see if we have a new case," Gates said. "I'm very inspired to be a part of this. I'm also very humbled."

John Cena, WWE Superstar, actor, and Rotary polio ambassador, emceed the pledging moment at the general session and applauded Rotary for its determination. "You were the trailblazers who wanted to prove to the world that this insurmountable task could be done," Cena said.

Earlier in the day, leaders from countries all over the world joined Gates and Rotary in pledging new money toward filling the $1.5 billion gap in the funding that the GPEI estimates is needed to achieve eradication. Rotary announced that it is increasing its annual fundraising goal to $50 million. Since the Gates Foundation and Rotary began working together in 2007, the two organizations have raised nearly $1.5 billion for polio eradication efforts.

Gates, who said his top priority for the last decade has been ending polio, acknowledged that challenges still lie ahead, especially in areas of conflict where polio remains endemic. “One of the toughest things to do is reach all the children who need the polio vaccine,” he said. “This is especially hard in conflict areas, because it is so difficult to build trust with all sides.”

But Gates also noted that Afghanistan, which still has areas of conflict, is nearly free of the virus. “That’s because the people running the [polio] program have helped build understanding that the only way to get rid of polio is to rise above political, religious, and social divisions.”

With fewer cases now than ever before, the surveillance and detection of the virus becomes more difficult. “To stop the virus completely, we have to know where it’s hiding,” said Gates.

A network of 146 labs worldwide tests about 200,000 stool samples for the poliovirus every year; 99.9 percent of them are negative. But that tiny percentage of positive results will help health officials focus immunization activities to prevent the virus from spreading. In addition, in countries where polio remains endemic, 125 environmental detection sites test sewage, because the poliovirus can survive in sewage for a short time.

Innovations inspired by polio eradication efforts can now have wide-ranging benefits for other global health campaigns, Gates said. Techniques like community mapping, disease surveillance, and expanding the role of health workers will help health authorities detect and contain other infectious diseases, like Ebola.

“That is what is so exciting about Rotary’s 30-year fight,” Gates told the crowd. “You are not only eradicating one of the worst diseases in history. You are also helping the poorest countries provide citizens with better health and a better future.” 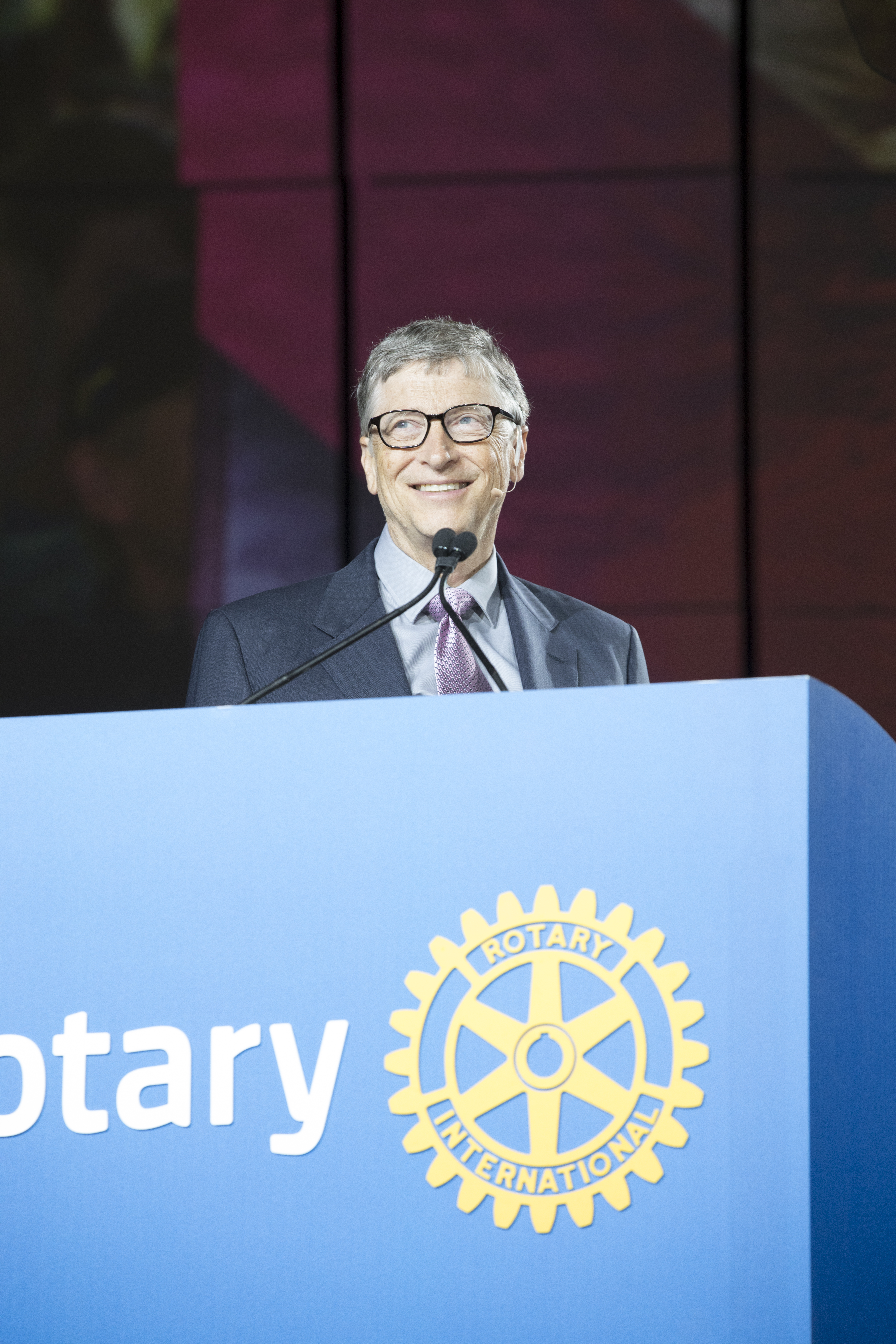