After 30 years of bold action, historic achievements, and sometimes discouraging setbacks, Rotary and its partners in the Global Polio Eradication Initiative (GPEI) have nearly brought polio to an end.

This groundbreaking public-private partnership and its innovative strategies were celebrated Wednesday during Rotary’s 6th annual World Polio Day event, held in Philadelphia, Pennsylvania, USA, at the College of Physicians of Philadelphia.

Rotary Foundation Trustee Chair Ron Burton began the program by noting that Philadelphia is where Rotary announced, at its international convention in 1988, that it doubled its fundraising goal of $120 million and raised $247 million.

The moment showed Rotary’s strength as an organization capable of tackling the challenge of ending the disease globally and spearheading one of the most ambitious public health initiatives in history, the GPEI. The other partners of the GPEI are the World Health Organization, UNICEF, U.S. Centers for Disease Control and Prevention, and the Bill & Melinda Gates Foundation.

“We knew then that the war against polio would be long, and it would have its challenges,” Burton said. “But we knew then, as we do now, that we could do it. Thirty years ago, I was proud to be part of the organization that took on the job, and the promise, of eradicating polio.”

Since its formation, the GPEI has trained and mobilized millions of volunteers and health workers, gained access to homes not reached by other health initiatives to immunize children, brought health interventions to underserved communities, and standardized timely global monitoring for polio cases and poliovirus, a process also known as surveillance.

The results have been monumental. Thirty years ago, the paralyzing disease affected 350,000 children in one year. Because of massive vaccination campaigns around the world, cases have dropped more than 99.9 percent, to only 20 reported so far this year. Polio, which was endemic in 125 countries in 1988, now remains so in just three: Afghanistan, Nigeria, and Pakistan. More than 2.5 billion children have been vaccinated, and more than $14 billion has been invested in the fight to eradicate the disease worldwide.

Lea Hegg, senior program officer of the vaccine delivery team at the Gates Foundation, gave an update on polio around the world. Despite tremendous progress, challenges remain before we can claim victory, she said in a video interview with Mark Wright, news host at an NBC television station in Seattle, Washington, USA.

“The fact is in Pakistan and Afghanistan, where we are still seeing cases, we have tremendous challenges that we’re facing: conflict and insecurity,” Hegg said. “We have to come up with new ways to solve those problems.”

She praised the brave polio workers who go to insecure areas to vaccinate children and also noted the importance of vaccination sites at transit posts outside these areas.

Hegg added, “We still have the tools, we have the persistence, and we’re still really confident that we’ll get there.”

In a question-and-answer session with Witt, Dr. Ujala Nayyar, a WHO surveillance officer in Punjab, Pakistan, discussed the importance of tracking the ever-circulating virus. Nayyar said that health workers need to be a step ahead of the poliovirus to interrupt its transmission. She also noted that Pakistan has the world’s largest network for environmental surveillance of polio.

“It’s a tough job. We have a network of government, private doctors plus informal health care providers, plus community mobilizers,” Nayyar said. “We are very confident on one thing — that we are detecting every polio case.”

Speakers also included award-winning chef, author, and polio survivor Ina Pinkney, who talked about her experience with the disease.  Jeffrey Kluger, senior editor at Time magazine, spoke about his recent experience traveling to Nigeria with Rotary to report on polio eradication.

Entertainment included a sneak peek from Rotary’s documentary “Drop to Zero” and a showing of its latest virtual reality film, “Two Drops of Patience.”

Banfield highlighted several End Polio Now activities that clubs organized to raise awareness of polio and funds for eradication efforts, including a rally in Delhi, India, where 2,000 members drove cars or bikes decorated with informational flags and stickers through the city. In Egypt, Rotary members hosted an End Polio Festival, which included a road race, a blood drive, and a concert that attracted thousands.

Rotary has contributed more than $1.8 billion to polio eradication since it started its PolioPlus program in 1985. The effort got a boost in August when Rotary announced it would provide an additional $96.5 million in grants to increase immunizations and surveillance.  Most of the funds were allocated to the three countries where polio remains endemic; Afghanistan ($22.9 million), Nigeria ($16.1 million), and Pakistan ($21.7 million). The rest was spread across 12 countries in Africa that are vulnerable to polio.

Rotary has also committed to raising $50 million a year over a three-year period for eradication activities. The Bill & Melinda Gates Foundation will match up to that amount 2-to-1, which could bring the total as high as $450 million.

Join us in the fight against polio

Watch a rebroadcast of the World Polio Day 2018 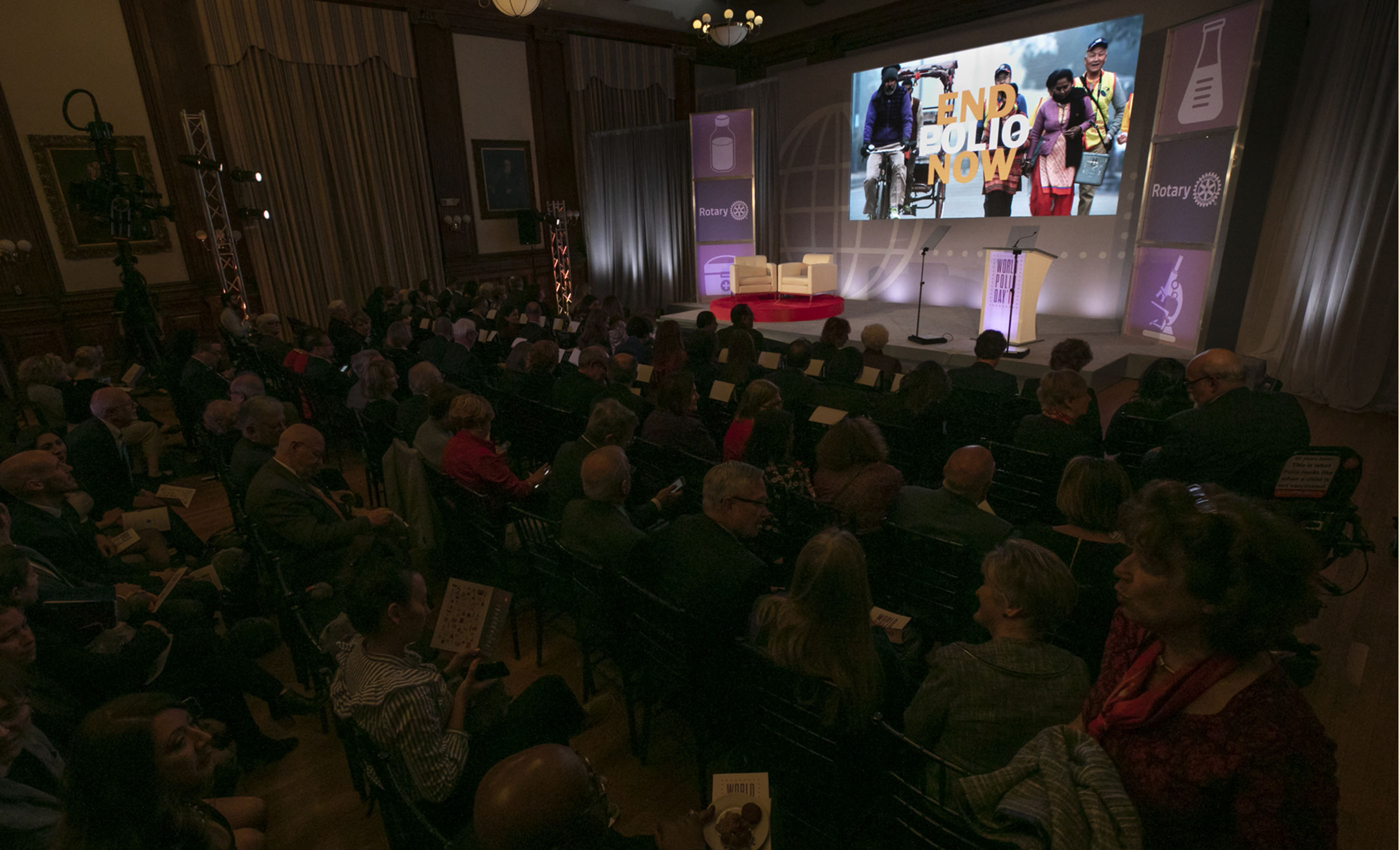