The discovery of the poliovirus in Nigeria last summer shocked eradication efforts. Here’s how Rotary is making sure it doesn’t happen again

For a 13-month-old boy whose family lives in northeastern Nigeria, escaping Boko Haram was only the beginning of a long, difficult journey.

When his family finally arrived at the Muna Garage camp for internally displaced people (IDP), they had walked more than 130 miles in three days. They were starving, and the camp was only a temporary setup with inadequate facilities, housing more than 15,000 people. But the worst news was yet to come. Health officials in the camp determined the baby had polio.

“It was heartbreaking,” says Tunji Funsho, chair of the Nigeria PolioPlus Committee and a member of the Rotary Club of Lekki Phase I. Funsho met the boy on a trip he took in August to three of the country’s IDP camps. “At least (the family was) able to escape Boko Haram. The child was able to walk but with a limp, and was quite malnourished.”

If it weren’t for the polio surveillance system that the World Health Organization (WHO) has in place at every one of Nigeria’s IDP camps, Funsho says, the boy’s polio could have easily gone unnoticed. In fact, it was a shock to the entire polio eradication effort in the country that a case existed at all.

The country hadn’t had a case since July 2014 and had been removed from the list of polio-endemic countries. But in August 2016, routine surveillance methods, which include sampling of sewage and wastewater to look for viruses circulating in the wild as well as monitoring and investigating all cases of paralysis in children, discovered two cases of polio in Borno state – one of them the 13-month-old. (Two more cases were subsequently reported.) Polio wasn’t gone from Nigeria after all.

“The new cases devastated us. Even one case is unacceptable. It’s very unfortunate we are in this position, but we are recalibrating our efforts to end this disease,” Nigeria’s health minister, Isaac Adewole, told Rotary leaders during a meeting at Rotary International World Headquarters at the time. “We consider this situation a national emergency.”

The importance of surveillance

The polio surveillance system, carried out mostly by WHO and the U.S. Centers for Disease Control and Prevention (CDC), two of Rotary’s partners in the Global Polio Eradication Initiative, consists of several parts. First, doctors and other community health workers such as healers and traditional birth attendants monitor children for paralysis. “Most times cases are not discovered at a medical facility – they’re discovered at home by the volunteer community mobilizers and people who are paying regular visits,” Funsho explains. “They find a child that is limping or unable to use a limb they’ve used before. They’re trained and they know the questions to ask.” If they discover a paralyzed child, the health workers report the case to WHO, which sends a surveillance team to collect stool samples from the child and his or her siblings for testing.

The second part of the surveillance process involves local authorities collecting samples from sewage systems or, in places that don’t have adequate sanitation facilities, rivers and bodies of water near large settlements. The samples are sent to a lab, one of 145 in the Global Polio Laboratory Network, which looks for the poliovirus. If it is found, the samples go on to a more sophisticated lab where scientists perform genetic sequencing to identify the strain and map where and when it has been seen before.

The worldwide scale of these surveillance efforts is massive and costs roughly $100 million every year. For the most part, these activities take place only in countries that don’t have adequate health systems already established. In the U.S., for example, if a child showing signs of paralysis visits the doctor, the necessary tests for polio are already a part of the working health system. But in countries that don’t have such a robust system, WHO takes on that responsibility. That means investigating more than 100,000 cases of paralysis around the world every year to rule out polio.

In Nigeria’s IDP camps, surveillance is more complicated. Before people enter, they are screened by security agencies (there have been several cases of suicide bombers trying to infiltrate the camps). Next, at the camp’s health facility, doctors evaluate the new arrivals’ overall health and screen them for polio. Volunteers then document what villages they have traveled from, using the information to track who is in the camp, where they are within the camp, and who their family members are.

The challenge of mobile populations

Before the new cases were detected, the surveillance teams working in IDP camps were vaccinating and searching for suspected polio cases as usual.

But in the official documents, when they were reporting their findings, the teams weren’t marking the displaced people as being located in their camps: They were being counted by their area of origination. However, surveillance teams and vaccinators weren’t actually traveling to some parts of the state where the displaced people had come from because the presence of the Boko Haram terrorist group made it difficult.

“This gave the impression there was good surveillance (in those areas), when in fact there were major blind spots,” says Mark Pallansch, director of the Division of Viral Diseases at the CDC. “We knew this was an area of concern, so we implemented additional measures to try to strengthen surveillance.”

The extra measures included scaling up environmental surveillance and sampling healthy individuals – including adults – for the presence of poliovirus as they exited inaccessible areas. Teams also searched IDP camps and host communities more frequently and reassigned the acute flaccid paralysis cases by place of onset. It was in part thanks to such strengthened activities that additional polio cases were found.

But the surveillance situation remains volatile, Pallansch confirms. “This really underscores the dangers of any low-level residual polio transmission in the face of any subnational surveillance gaps,” he says. “We still don’t have an exact idea of virus transmission in some areas of Borno. Operationally, we have to therefore assume that it remains an infected area and our focus has to be on reaching the children with the vaccine, all the while plugging the surveillance holes.”

A major part of the problem is that in the area where the cases of polio were discovered in Borno, the health system is decimated, impeding the discovery and reporting of the poliovirus. In December, WHO health monitors reported that 35 percent of 743 health facilities in Borno were destroyed and 29 percent were damaged. Sixty percent of the remaining health sites have no access to safe water.

But it’s not just the breakdown of the health system that is causing the problem. Until recent military incursions by the Nigerian government, Boko Haram occupied more than half of Borno. And, unlike the Taliban, which controls areas of Afghanistan (one of only two other countries that have yet to eradicate polio), Boko Haram does not negotiate with vaccinators who want to enter areas they are in.

Nigeria isn’t the only area of the world that has regions with limited access. The GPEI has begun an extensive analysis of surveillance in other countries to ensure that the Nigerian “blind spot” isn’t a problem elsewhere. “Boko Haram makes many parts of the area virtually inaccessible. Depending on where Boko Haram is, that can be inclusive of bordering countries,” Pallansch says. “It will take some time to gather information and analyze it properly. But at a first pass it’s not quite as worrying as some may think, except in those areas we already know are problems. In places like South Sudan and parts of the Horn of Africa, the border of Afghanistan and Pakistan, we’re intensifying our efforts.

“In a sense, the situation in Borno is a good comparison to the global situation,” Pallansch says. “Ninety-nine percent of Nigeria is polio-free. But unless you eradicate the disease completely, the rest of the country will remain at risk. The same holds true globally: 99 percent of the world is polio-free. But all countries remain at risk until we finish the job everywhere.”

A surge in vaccinations

Through genetic testing of stool samples taken from the new polio patients, the GPEI traced the poliovirus to a strain that emerged in Chad almost five years ago and circulated through Chad and parts of Nigeria. It had been eliminated from accessible areas, but it turns out that it never left parts of northern Nigeria.

The discovery triggered an increase in vaccinations in other countries that have similarly inaccessible areas. In Nigeria alone, more than 850,000 children were vaccinated in the first five days after the cases were discovered, according to the country’s health minister. And Nigerian border countries coordinated efforts to increase protection of their own polio-free status.

The very nature of the GPEI’s system being at once a very large network of worldwide organizations and small groups such as Rotary clubs made up of local residents is what helped the teams respond so quickly to the new information, Pallansch says. “The system itself means there is surge capacity. No one place has to stand on its own. There are always other places within the system that can help,” he says. Because of that, the Polio Eradication Initiative continues on pace – revealing weak points where they may exist and fixing them – but still marching toward that day when polio is gone for good.

After certification, the polio surveillance network is likely to continue providing services. It has already been used to help contain other deadly diseases such as Ebola and measles, and there are ongoing discussions about what the surveillance strategy will be after polio, according to a spokesperson at WHO. The biggest question is how that network can be maintained so that it can go on hunting for other diseases.

• Erin Biba is a science journalist whose work regularly appears in Newsweek, Scientific American, and BBC.com.

• Read more stories in The Rotarian 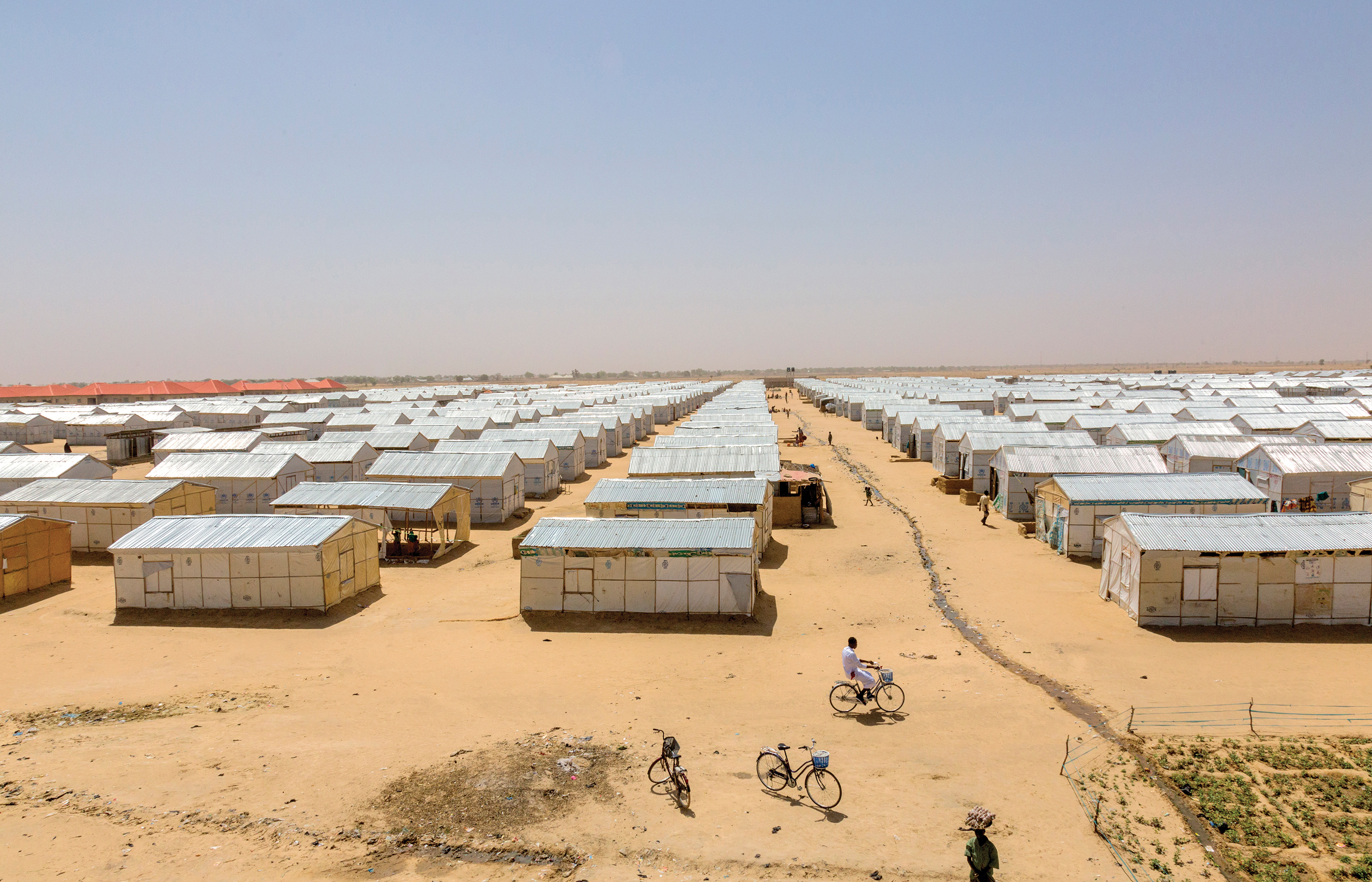