It’s nearly Valentine’s Day. Seated around a table are five older adults and four children under age four, the decades between them bridged by the heart-filled sheets they’re coloring together. One boy holds up his creation. “Look at mine!” he says. Everyone at the table claps, and Bob Husslein offers some grandfatherly words of encouragement: “In the lines, too!” One by one, the kids show off their artwork. “I can’t believe you did that all by yourself,” Husslein says to a little girl. “Are you going to give it to your mommy?”

The art room at St. Ann Center for Intergenerational Care on Milwaukee’s south side is a homey hodgepodge of donated craft supplies: cups of paintbrushes, stacks of colored paper, and bins of beads organized by color. The room is open to participants in the center’s adult care program who want to do crafts, and when the children who attend day care join them, the room buzzes with energy. “In the time I’ve been volunteering here, I can see the difference in how they feel and work with each other,” Husslein says.

“I help them paint if they need help with painting,” says George Murray, one of 200 adults who take part in the center’s program. “Some of them get frustrated and upset. You just have to calm them down. You have to show them they matter to somebody. They look up to an older person.” And, he adds, the benefits go both ways: “They show you stuff you don’t know. Some of these kids are pretty smart.”

"I wanted it to be colorful and nonclinical, a place where they could play together and dance together."

Among the adults coloring valentines is Edna Lonergan. She’s a member of the Rotary Club of Milwaukee, a Catholic nun, and the founder of St. Ann Center, which brings together young and old to spend their days under one roof. On one side of the center, the children’s day care is furnished with pint-size tables and chairs and filled with artwork, including a mural of fairies. On the other side, adults — frail elderly people as well as adults of all ages with disabilities — socialize, take part in activities, and receive therapy. In between, a sunlit atrium brims with cacti, ferns, and palm trees (a staff massage therapist doubles as the gardener). A fireplace burns cheerfully at the entrance, and the walls are painted to evoke a European village. “I wanted it to be colorful and nonclinical,” Lonergan says, “a place where they could play together and dance together.”

Lonergan is a gerontologist by training. In 1983, she opened an adult day center in the basement of the Sisters of St. Francis of Assisi convent in Milwaukee. As the program grew, she realized that many members of her staff were single mothers whose children often needed a place to go when they weren’t in school. “So I said, ‘Why not bring them?’ And magic happened. The adults wanted to do things with the kids. They wanted to have tea parties and teach them how to fish,” she says. “They had a sense of purpose.”

As Lonergan observed the camaraderie between the groups, she began looking for other places that provided intergenerational care. She saw things like children singing for adults at a nursing home, but never found a program that matched the bonding she was witnessing. So she decided to create something new. St. Ann Center for Intergenerational Care opened in 1999.

Since then, Lonergan’s idea of an intergenerational model of care has been lauded by the White House, presented to the United Nations, and featured in the New York Times. “A lot of people say to me, ‘You think outside of the box,’ ” she says. “I really don’t. I bring other people’s boxes into mine.”

Scientists think that this need to connect across generations may be baked into humans’ DNA — that grandparents, in particular grandmothers, played a critical role in our evolution. The reason women live so long beyond reproductive age, some anthropologists theorize, is that the care they provide for their daughters’ children frees up their daughters to produce more children sooner. “You can argue that older people connecting with younger people is something that goes back to the beginning of humanity,” says Marc Freedman, author of How to Live Forever: The Enduring Power of Connecting Generations.

“A lot of people say to me, ‘You think outside of the box.’ I really don’t. I bring other people’s boxes into mine.”

But things changed as society became more industrialized. Today, kids go to day care or school, spending their days with classmates their own age. Young and middle-age adults go to work. And after retirement, many older adults live in age-restricted housing and spend their leisure time participating in activities geared specifically to them. “We have lost the extended family,” Lonergan says.

The two groups that experience social isolation the most are older adults and teenagers, says Donna Butts, executive director of Generations United, a U.S. nonprofit founded in 1986 by leaders at the National Council on Aging, the Child Welfare League of America, the Children’s Defense Fund, and AARP. “Younger people may have 100 friends on whatever social media platform they’re using, but when it comes to actually touching somebody, or being able to share the trials and tribulations of growing up, they don’t have anybody they’re that close to,” Butts says.

A survey by Generations United and the Eisner Foundation — a nonprofit focused on intergenerational programs —found that 53 percent of American adults regularly spend time with few people who are much older or younger than they are, aside from family members. The figure is even higher for people ages 18 to 34, with 61 percent reporting few younger or older acquaintances. Grandparents often live hundreds of miles away from their grandchildren, and there aren’t many places to go to meet people across the age spectrum.

This is where Rotary can help.

The Boys & Girls Club in Gig Harbor, Washington, was buzzing. Its tables were lined with people — older folks on one side, teens on the other, 52 participants in all. Cards on the tables listed potential conversation starters: “Do you have dogs?” or “Do you like to travel?” Each senior-teen pair had five minutes to get to know each other before the teen moved along to another older person and everything started again.

You may have heard of speed dating. This is the intergenerational equivalent.

“It turned out to be amazing,” says Kathi Melendez, who initiated the March 2019 event called InterGenFest, a partnership between the Rotary Club of Gig Harbor North and the Gig Harbor Interact clubs. Melendez and her husband, Louis (both have since transferred to the Rotary E-Club of District 5020 International), worked closely with two Interactors to make it happen. After the speed-meeting part of the event, the young people answered questions that the seniors had about smartphones, and the older people advised the teens about job interviews.

While talk of a “generational divide” is perpetual — epitomized, most recently, by the catchphrase “OK boomer” — this sort of program helps people better understand each other and work together. “It’s kind of like Rotary Youth Exchange,” Melendez says. “The more you know about the other type of person, the better you understand them. The older people don’t just say, ‘Oh, that’s a teenager wearing torn pants.’ Now they know there’s more to the teen than what they wear. A lot of the young people don’t have a chance to be around seniors. The program gave them all an awareness of other people’s needs and feelings.”

In Vienna, Austria, Rotaractors felt ignored by Rotarians. Rather than complain, they examined their own behavior and realized they weren’t doing much to include Interactors — their clubs’ future members — in their activities. So in 2016, they launched a mentoring program between Rotaractors and Interactors that has since expanded to include mentorship between Rotarians and Rotaractors. It has also taken on a humanitarian project: building housing for Bosnian families affected by the Bosnian War.

“At first we thought Rotary clubs would sponsor the project and Interactors and Rotaractors would build the houses,” says Albert Kafka, a member of the Rotary Club of Wien-Oper and the Rotaract Club of Wien-Stadtpark. Kafka was honored as one of six People of Action: Young Innovators during Rotary Day at the United Nations in Nairobi, Kenya, in 2018 for the program. “But in fact, Rotarians also joined the housebuilding. These kinds of projects are much more common now.”

According to Generations United’s Donna Butts, “Almost anything can be stronger if you use an intergenerational lens.” But, she adds, you must keep in mind two key points. First, make sure that the programs are reciprocal. “It’s the connection that matters,” Butts says. “They’re both giving and receiving.” Second, it’s important to prepare. “You can’t just throw older and younger people together because it’s magic,” she insists. “Magic takes work.”

Generations United created a multigenerational workforce workbook that could help clubs that are grappling with how to better integrate members of different ages. Rotary clubs could apply those recommendations, Butts suggests. “Any committee a Rotary club might form should intentionally have younger and older people on it because of the different perspectives they bring,” she says. “We have a tendency to stereotype or box people in. That doesn’t help anybody.”

One of the keys to bringing generations together is proximity, and that’s where a place like St. Ann Center — with its balance of both formal intergenerational programs, such as dances and music classes, and informal moments of laughter and greetings — fits in. “Sister Edna has been visionary,” Butts says.

Children who engage in activities led by adult care participants have higher personal and social development scores than children who do not.

Lonergan has worked with groups in Taiwan and China that are interested in learning more about the model. While she was giving a speech at an event in Singapore, a number of people got up to get their friends and bring them in to hear what she had to say. “This has really taken hold, and people want to hear more about it,” she says.

Rosemarie Alloway has been a nursing assistant for 20 years, the past five at St. Ann Center. She has seen the benefits of spending time together for adults and children alike. When the kids come up for stories and games, she observes how the mood of the adult participants changes: “They look forward to that time.”

Her daughter, three-year-old Alexis, is one of those children. “Now when we go to a restaurant, she’ll go up to an older couple and introduce herself,” Alloway says. “Her speech is clearer. I think the kids learn more.”

Research shows that children who engage in activities led by adult care participants improve their motor and cognitive skills; in addition, they have higher personal and social development scores than children who are not involved in intergenerational programs. Lonergan has also noted that children participating in the program are learning to trust people with disabilities. “A lot of bullying occurs in schools because children are afraid of that which is different,” she says.

In the St. Ann Center atrium, children and adults swat red balloons back and forth over a net. Kids shriek joyfully, and music, punctuated by the occasional sound of popping balloons, blasts from a boombox. Alexis is off to the side, sitting and stomping on her balloon, trying to pop it. Her mom is at work, but she is surrounded by a team of surrogate grandparents, coloring together, playing together, and enjoying one another’s company. Just as they were born to do.

• Photos in this feature were taken before COVID-19 regulations on social distancing.

• This story originally appeared in the July 2020 issue of The Rotarian magazine. 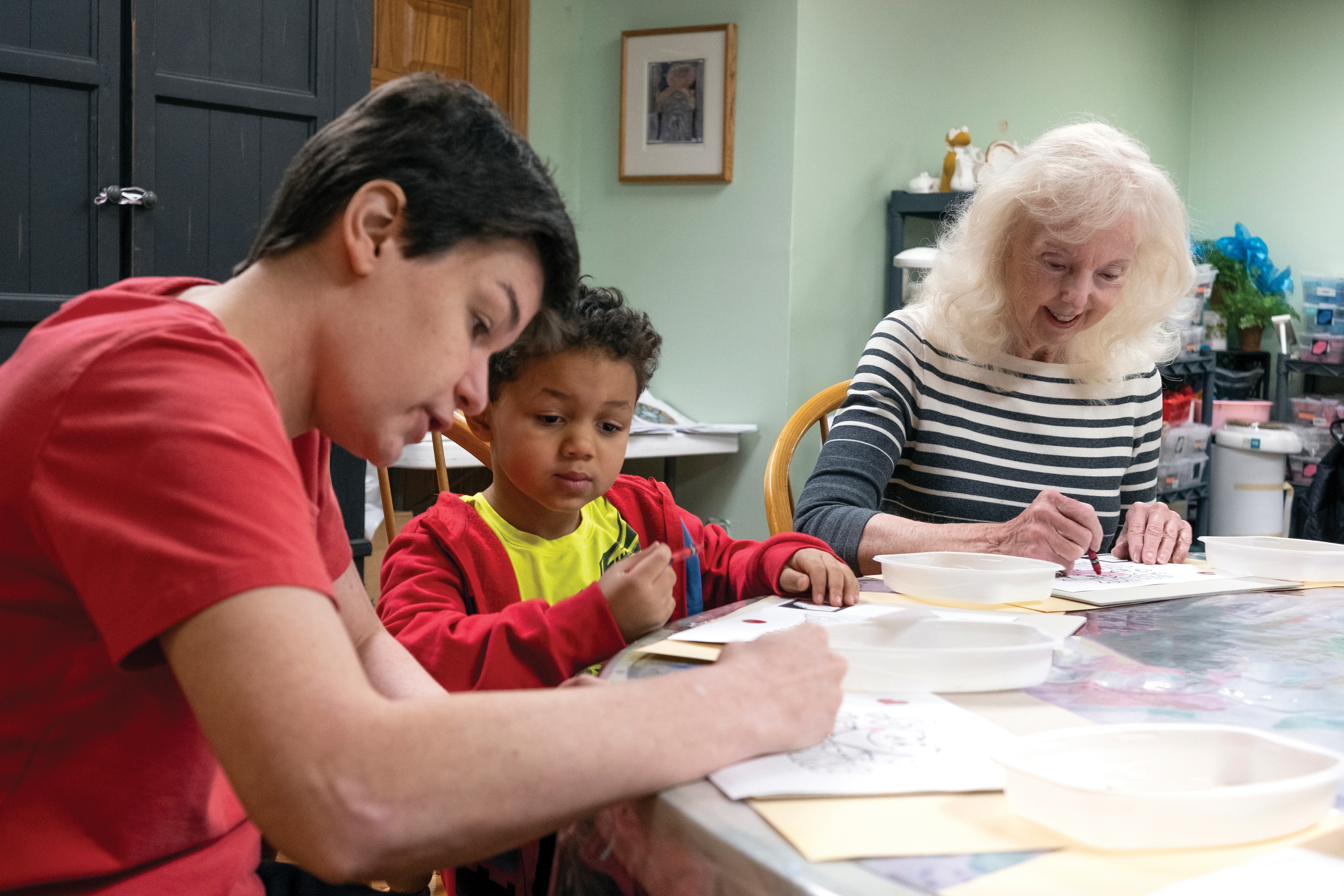