By Kevin Cook Photographs [by]

May 2015, a half-dozen civic leaders met in Flower Mound, Texas, a short drive (or long kickoff) from Dallas. Five were already Rotarians, but while they enjoyed their weekly meetings, they were itching to try some ideas of their own. “Meeting time, for one thing,” recalls Andy Eads, a Denton County commissioner whose energy level could power several suburbs. “Thursday at lunch wasn’t working for us.”

The six founders wanted to get a jump on the workday, not stop in the middle for a lunch meeting. They discussed founding a club that would meet at 7 a.m. or even 6:30, but bank President Julie Meyer and a couple of other parents in the group said no. “We have to get breakfast on the table and kids off to school before we start serving humanity.” In the end, they settled on 8 a.m. Fridays – a breakfast meeting to start the day.

Next question: Who else should be in the club?

**“Let’s all pull out our phones,” Eads told them. “Scroll down your contacts. We’re looking for people who would enjoy Rotary. People who’ve got the three T’s: talent, time, and treasure.”

Next, they invited more than a dozen candidates to several more planning sessions. “We used a flip chart to brainstorm how our club should operate,” remembers club President Lori Fickling. “What should our focus be? Who could help us? Sort of like crowdsourcing – that group input really helped us be intentional in building a new club.”

Finally, the founders drew up a list of potential members and discussed every name. They drew up a second list as well, a roster of former Rotarians who lived nearby and might have the three T’s. “Then we fanned out to make ‘the ask.’”

They knew that organizing a new Rotary club requires at least 20 members, but the Denton half-dozen had bigger ambitions. “We really wanted to charter with 50,” says Eads. In August 2015, they chartered with 62. They’ve grown every month since then.

The result is the hard-charging Rotary Club of Cross Timbers, Texas, named for a wide swath of woodland that runs south from Kansas and Oklahoma. During pioneer days, this terrain was practically impassible; Washington Irving described wagon trains moving through as if they were “struggling through forests of cast iron.”

Today the Cross Timbers Rotarians motor through a handsome suburb to Friday morning meetings at Bridlewood Golf Club, where they marvel at the progress of one of the fastest-growing clubs in recent Rotary history. And they still like eating breakfast together.

We don’t shame or tease people for missing meetings. We stress perfect engagement over perfect attendance.

There are many reasons for Cross Timbers’ growth, from the club’s prosperous environs to its founders’ Texas-size ambitions, but two factors stand out: energy and innovation.

From the start, the founders settled on a step-by-step plan to realize their ambitions. Rather than name the club for any particular town, they chose the more general name in hopes of representing more of the 1,000-square-mile Denton County, with its population of nearly 700,000. They chose Bridlewood for its well-appointed clubhouse, with conference rooms that can accommodate a crowd.

According to Eads, “People tend to compartmentalize. They see Rotary as part of the workweek, and I think that holds a lot of clubs back. Members think, ‘I’ve got Rotary today,’ like it’s a business meeting. We wanted our club to be much more than one of our business duties. We saw it as a big part of our lives, almost a family thing.”

One result is a club almost evenly split between women and men. Four of the core six were female. Two – Andy and Ginger Eads – were married to each other. Other charter members joined with their spouses.

Most important of all, perhaps, the founders were determined to make their club as positive as could be. Their unofficial theme was No drama, meaning no sniping at fellow Rotarians for anything short of major felonies.

Eads sees mandatory weekly meetings as a drawback when it comes to recruiting new members. How many modern businesspeople can spare an hour a week? The Cross Timbers approach de-emphasizes attendance in favor of a more free-form involvement.

When members gather for a camping trip, golf outing, cookout, Gulf of Mexico cruise, or just about anything short of a chance meeting at the supermarket, somebody asks, “Does this count as a makeup?” The answer is always yes.

Still, they preserve the core ideal of Service Above Self. They haven’t gone “rogue,” says Fickling. “We wanted to innovate, but we’re all about Rotary tradition, too.”

Each Cross Timbers member posts on the club’s Facebook page.

“We’ve got 100 percent participation online,” says Fickling. You would be hard-pressed to find a highlight that isn’t recorded on the club’s Facebook page.

A wine lovers group run by bubbly Tracee Elrod is typical. Each month, when 25 to 30 Rotarians and spouses gather at a host’s home for sips and appetizers – lamb stew to go with a New Zealand wine, or tapas to complement a Spanish Rioja – someone posts a photo or video on the Cross Timbers Facebook page. When the Fantasy Football group gathers, trash talk ensues on- and off-line. When the club’s Rotary Readers or Rotary Chefs groups get together to discuss a new novel or sizzle up some barbecue, they smile for selfies that pop up a minute later on social media. Ditto for another half-dozen groups, each with its own logo and fired-up members.

“In an average week, we reach about 500 people through shared posts on our page,” says Teresa Grawe, a charter member who wrangles the club’s social media presence. “When we post videos or special events, we reach thousands more.”

Cross Timbers members also reach others the old-fashioned way, one good deed at a time.

Fickling’s husband, Mike, a retired firefighter and paramedic, brought his own sort of engagement when he joined the club.  He told other members about answering 911 calls.

“One day we saved a little girl who got her foot trapped in a storm drain. The rain was pouring down and she was scared, but we got her loose by cutting off her shoe. Pop – her foot was free. And her mother stared crying, speaking Spanish. We thought she was happy, but no. She was crying because those were the only shoes her daughter had.”

The firefighters bought the girl another pair, and after Mike Fickling joined the Cross Timbers club he helped organize a group called the Rotary Responders.

“Anyone who needs help can call us,” he says.

The hotline is Mike’s cellphone number. Not long ago he heard about a single mother who lost her home and possessions in a fire. The Rotary Responders, working with a local Wal-Mart, provided $500 in Wal-Mart gift cards for the woman and her family.

In January, the Cross Timbers club gathered for one of its first meetings of 2017. By 7:45 a.m., dozens of smartly dressed Rotarians were chatting over coffee in a conference room with views of Bridlewood’s championship golf course. Soon the room was full.

While the club stands by its no-drama motto, there was plenty of excitement. The bustle was wall-to-wall, with big hellos, hugs, and backslaps all around. President Fickling gave her blond tresses a quick pat-down and started for the podium. “Rock and roll,” she said. A second later she rang a bronze bell to start the meeting.

Much of what happened in the next hour would be familiar to Rotarians from Keokuk to Calcutta.

Using a wireless microphone to address the crowd, Fickling greeted guests and visiting members from other clubs. Then she introduced District Governor Mary Ann McDuff for a watershed moment: the induction of four new members, including the 100th Cross Timbers Rotarian. Eads brought golden balloons to mark the occasion, which was instantly recorded and posted on Facebook.

Next, members tossed dollars into the club’s Happy Jar as they announced good news. Co-founder and incoming President Lori Walker – one of several consecutive female club presidents – took the mic to report an upcoming blood drive.

“It’s going to be fun,” she said. Not the first word you might think of while donating blood, but social director Walker called it happy news. Each pint of blood would save three lives.

Walker handed the mic to the next Happy Jar contributor, a man who had two announcements.

With club business done, Fickling handed the mic to Ann Pape, a member of the Rotary Club of Lewisville, Texas, and CEO of Communities in Schools of North Texas, a nonprofit devoted to helping students finish high school rather than dropping out. In some cases, that might involve tutoring or transportation. In others, it might be simpler.

“We’ve had kids who did everything they had to academically, but they couldn’t afford to go to commencement,” she said, “until we rented them a cap and gown.”

Festivities closed with a recital of The Four-Way Test and a chorus of “See you next week!” Pape thanked Fickling with an embrace, adding a line that might make Paul Harris blush.

“I am so glad to be here,” she said, “because I’m as religious about Rotary as I am about church.”

The founders expect the club to keep growing at a breakneck pace thanks to its blend of Rotary tradition and Cross Timbers innovation.

“When you think about it,” Eads says, “the best and worst things about Rotary are really the same thing – that weekly meeting. People are scared to make such a big commitment. But if you’ve got the right club with the right sort of people, it’s not a chore. It’s something you aim for. We spend the whole week looking forward to Friday morning.” n

- A movie based on Kevin Cook’s book Tommy’s Honor was released in the U.S. in April. 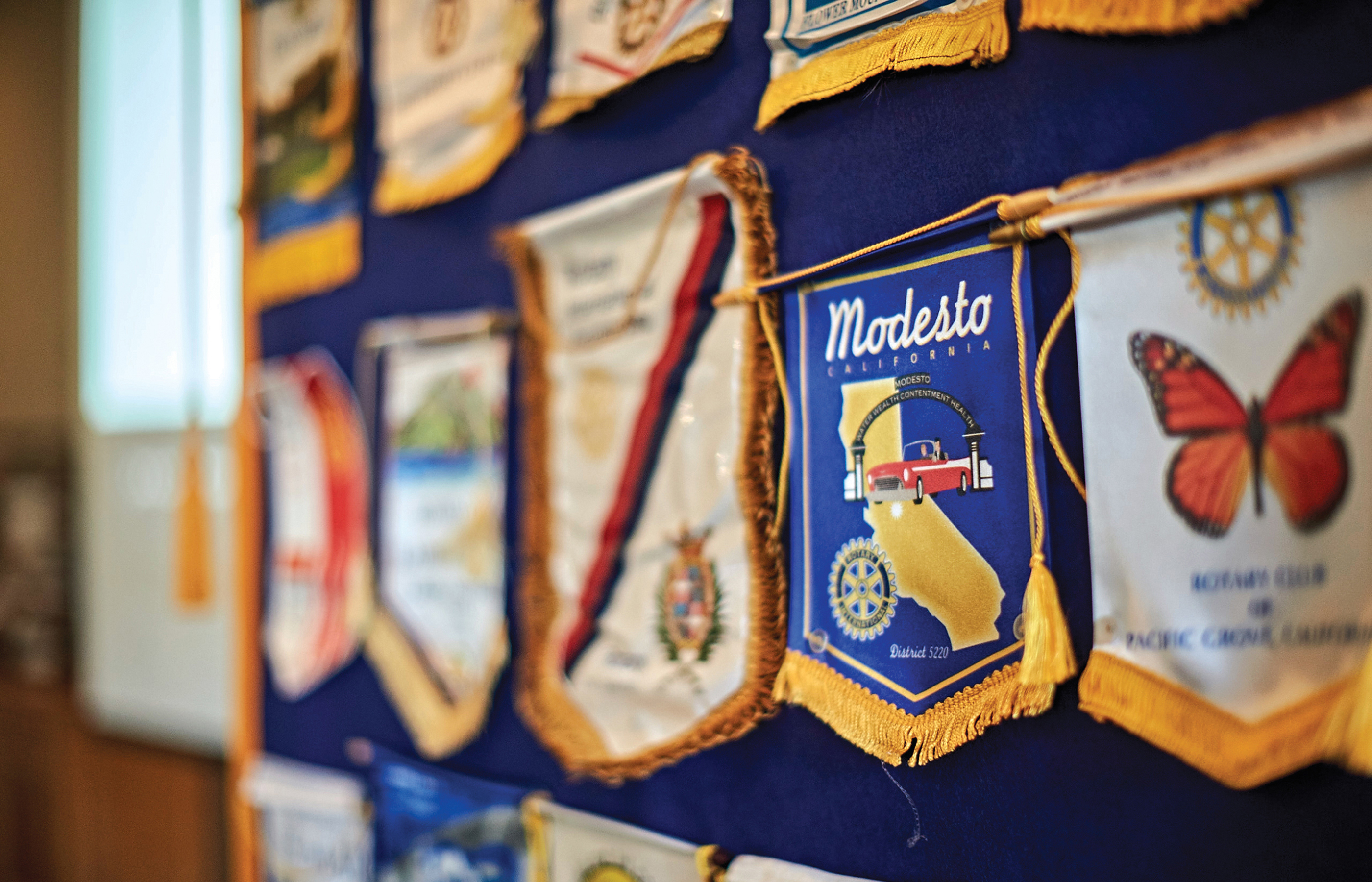