After overcoming a tough childhood, pediatrician Ramon Resa is helping to raise a new generation of kids

By Mary MacVean Photos by NashCO

At three years old, an age when most toddlers are being assessed on how high they can count or how well they can recite their ABCs, Ramon Resa faced a different standard of measurement: how much cotton he could pile up in the farm fields of central California.

And for many years, as he harvested cotton, walnuts, or oranges, Resa felt that he didn’t measure up. That feeling was reinforced by some who might have been his mentors and guides: Even though he graduated at the top of his eighth-grade class, he was told to let a white classmate give the valedictory speech. A school counselor tried to shunt him into wood shop instead of algebra.

But Resa persevered. Today, to visit him at work, you’ll walk through a door labeled Dr. Ramon Resa. A Rotarian and a pediatrician in Porterville, Calif., he spends his days in an office not far from the tiny box of a house where he grew up among 14 relatives.

From farmworker to pediatrician

At work, Resa moves among four exam rooms, sometimes seeing more than 50 patients in a day: a three-year-old suffering from allergies, a two-year-old in for a checkup, a 10-year-old who hurt his thumb playing sports. Resa tickles a child lightly as he checks a throat or belly, switching from English to Spanish as needed. “I can out-stare you,” he jokes with a determined boy who has a sinus infection.

“He teases the babies and the moms, and he builds their confidence up, ” says his office manager, Shirley Rowell, who has worked with Resa since he arrived in Porterville in 1985 with his newly minted medical degree. The children energize him, bringing out his jovial nature, but he’s also gentle and caring. When C-section newborns were moved from surgery to the maternity ward, Rowell recalls, Resa always carried them in his arms and talked to them. He never used the transport carts. “Of course it was against protocol,” Resa says. “But if I have a chance to bond with the baby, I will.”

In his own childhood, doctors were called only for the most severe ailments. Resa was the fifth child born to a mother barely out of her teens herself, and he never knew his father. He and two brothers were sent to live with their grandparents: The kids crowded in with “Ama” and “Apa,” uncles, aunts, and cousins, sleeping on mattresses on the floor and sharing one bathroom. Goats, pigs, and chickens lived in a side yard. Everyone had to pitch in.

By the time he was seven or eight, he felt he was “no longer a child,” Resa wrote in his 2010 memoir, Out of the Fields. He was a worker who was paid 3 cents a pound for cotton. He tried to prove his worth by outworking people much older than he was. But alcohol, fights, and other stressors were all around him, and his feelings of isolation, inadequacy, and resentment grew. By the start of high school, Resa began to feel a debilitating depression that robbed him of the joy of his scholastic and athletic achievements. He found himself dreading the bad things he was sure were to come. But he had brains and determination, and he vowed to succeed.

Research has shown that aspirations and resolve play a role in resilience. Supportive role models do, too. Several key people saw promise in the young student and encouraged him: his fourth-grade teacher. A woman in the school district office. And his neighbors Jim and Susan Drake. Jim Drake was a principal aide to César Chávez, but Resa didn’t learn about his role in the labor movement until years later.

Ernest Moreno, a friend since childhood who also grew up in a farmworker family, has often thought about why he and Resa succeeded when others did not. “You had to think you were special and didn’t belong in that environment,” says Moreno, who runs an executive search firm in Illinois. “You had to have friends who were like you” – Moreno recalls the many Friday nights he and Resa spent playing board games such as Risk – “and you had to want it.”

A turning point: University of California, medical school, and Rotary

Resa’s first exposure to Rotary came when good grades earned him a club-sponsored trip to see the Los Angeles Dodgers. It was his first trip anywhere.

As a teenager, he became aware of the advantages some of his classmates had: tutoring and private lessons, vacations, college and career expectations. But when a tennis coach offered him free private lessons, Resa turned him down. He had to work; his family needed the money. During his junior year in high school, he had to take a break from the cross-country team because his knees were so sore from kneeling to harvest walnuts. He was relieved when he got a letter jacket anyway, feeling sure that it would compel other students to see him “as a real person and not as a nobody.”

Early in his freshman year at UCSC, Resa met an artist named Debbie Binger, and she has been his partner ever since – through medical school at UC Irvine, parenthood, all the ups and downs of life. The couple married and settled in California’s Central Valley, and Resa joined the Rotary Club of Porterville. In 1990, he became its president.

Yet he still couldn’t kick those childhood feelings of inadequacy. “I didn’t belong in front of these people,” he says. “I felt like a simple farmworker boy pretending to be a doctor.”

But he didn’t feel at home among his family anymore, either. “He went through a period where he didn’t fit in either place,” says Debbie. She eventually persuaded him to see a therapist for his depression. That, combined with religion, helped him to shed his bitterness and resentment and to understand that his family had done the best they could for him.

At the end of 1990, a freeze devastated the Central Valley citrus industry and caused nearly $1 billion in damage. Rotarians, Resa says, understood what the disaster meant to growers, who were their fellow community leaders. But Resa also understood what the freeze meant for the farmworkers – at least 100,000 lost their jobs – and for their families. He knew that his Rotary club could help.

But first, he would need to tell them his story.

“So at the podium, I told my story of going without food, relying on donations, and going to bed hungry,” he says. “I was ashamed of the way I grew up. I didn’t tell Rotary about it until I wanted to help get the farmworkers food.”

His fellow Rotarians responded immediately. Contributions poured in to help the farmworker families get by. Ken Boyd, then governor of District 5230, who was at that meeting, had had no idea about the childhood his friend had endured. He spread the word to all 44 clubs in his district at that time.

To learn more about the documentary being made about Resa's life, visit ramonrising.film.

Today, Resa tells his story all over the country – to teenagers and Rotary members, to teachers and migrant worker advocates, at the Rotary Youth Leadership Awards and at medical schools. He wrote a memoir, and a documentary film about his life is being produced.

But he still hates speaking in public – at least until it’s over. And then he loves it, because every time, he says, at least one person comes up to him with a story of resilience: a childhood spent in a crack house or with a severe learning disability. A stutter like the one Resa had.

“He affects kids by letting them know they can do what they want,” Boyd says. “And when you believe it, you really can.”

Nina Clancy, another former district governor, is among those who encourage Resa to keep on telling his story. “I’ve never heard anyone so courageous, so inspiring,” she says. “He has a zest for life that couldn’t be stamped out.”

Accepting the past, and moving on

At home, the Resas’ two children are now grown: Marina is an actor in Los Angeles, and Joshua is a fellow in pediatric oncology. Resa, meanwhile, is not-so-patiently waiting to become a grandfather. At his Rotary meeting, he jokingly bemoans his fellow members’ success – at acquiring grandchildren. At work, he holds an infant and says, “Can I keep him?”

But for many years, Resa kept his other relatives at a distance. Many of his family members were surprised by parts of his memoir; some remember things differently. Some told him Out of the Fields deepened their understanding of the family and of him. His uncle Esmael, one of the kids in his childhood home, says, “I felt like he slapped me, I was so shocked. I thought I knew everything about him.”

On one recent evening, some 20 members of the family gather at Round Table Pizza in Visalia, taking over two large tables for some boisterous storytelling and catching up. Tales of how hard they worked get the loudest laughs, but when asked if those experiences were funny at the time, there’s a unanimous chorus of “No!”

But even as a child, Resa was struck by the beauty of his surroundings: “One thing I liked about picking oranges is how spectacular the groves looked,” he says. Driving past the fields where he once worked, through the blocks of houses where he spent his childhood, and past produce-packing houses along streets with names such as Olive and Orange, Resa points out the snow-topped mountains in the distance, the stands of walnut trees, and the fruit-heavy citrus groves extending to the horizon.

“My biggest regret is not going back and inspiring the next generation of my family,” he says. “I didn’t destroy the bridge. I just didn’t cross over it very often.” Fiercely protective of his children, he kept them away from relatives who struggled with drugs or gangs.

But those bonds are being mended. He stops one morning at his sister Rosa’s house. Inside, he helps himself to homemade tortillas, potatoes, and chorizo. “I still don’t know anything that tastes better than scooping a fresh corn tortilla into the kettle for a mouthful of hot chili with its iron taste from the pot, especially on a cold, crisp winter day,” he says.

These days, Resa can hold on to the best of his memories without any bitter taste. 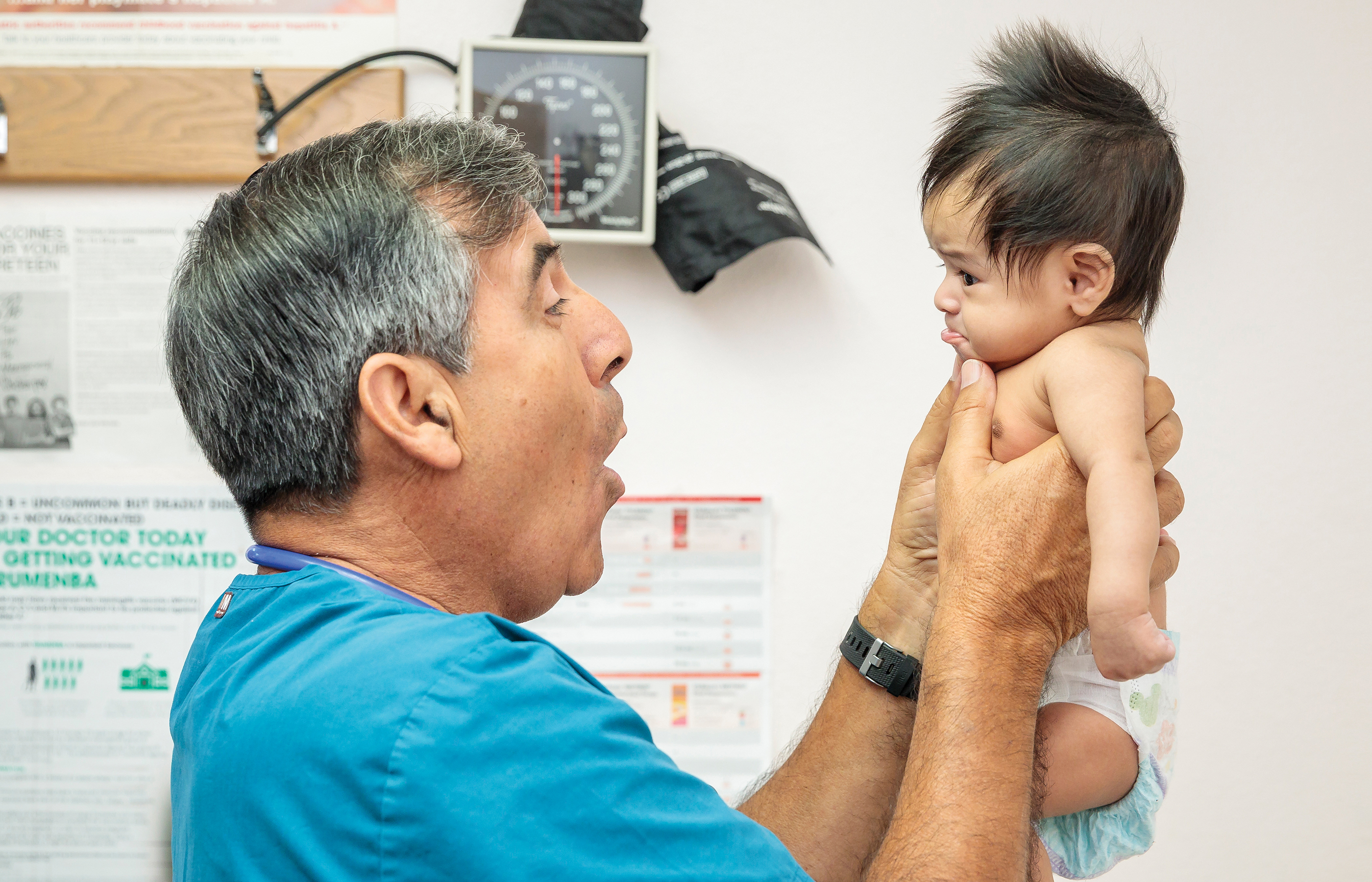